Welcome to the third instalment of our newsletter!
In this edition, find out about our AGM, our submission at the RHS Tatton Flower Show, how our share offer is progressing, an invitation to a day of environmental talks and discussions that we are a part of, and how much energy our installed solar panels have produced so far.

9 members and 6 non-members attended the meeting, with 3 members voting by proxy on the agenda items.

Minutes of the AGM:

After the AGM, the board led a discussion about the future direction of the Society, around governance and encouraging more of the members to participate in day to day running of the society, and managing events. Nikki Davies volunteered to help manage events. Andy Hunter-Russall and John Nuttall volunteered to help support at events.

Working with IF Oldham and The Real Junk Food Project Oldham, we created a community bus stop designed to educate people about the problem of food waste and how to eat healthily, and to provide a space for sharing food and getting inspiration about cooking!

The bus stop was covered in edible plants on its walls, showing how much food can be grown in a limited space by making the most of vertical growing techniques. In the bus stop, there are shelves containing recipe books to inspire people and a community fridge where surplus food can be stored for local people to use as they need.

Best of all, the fridge is powered by solar panels and a battery system provided by our installer so that the fridge will keep cool no matter where the bus stop is placed! 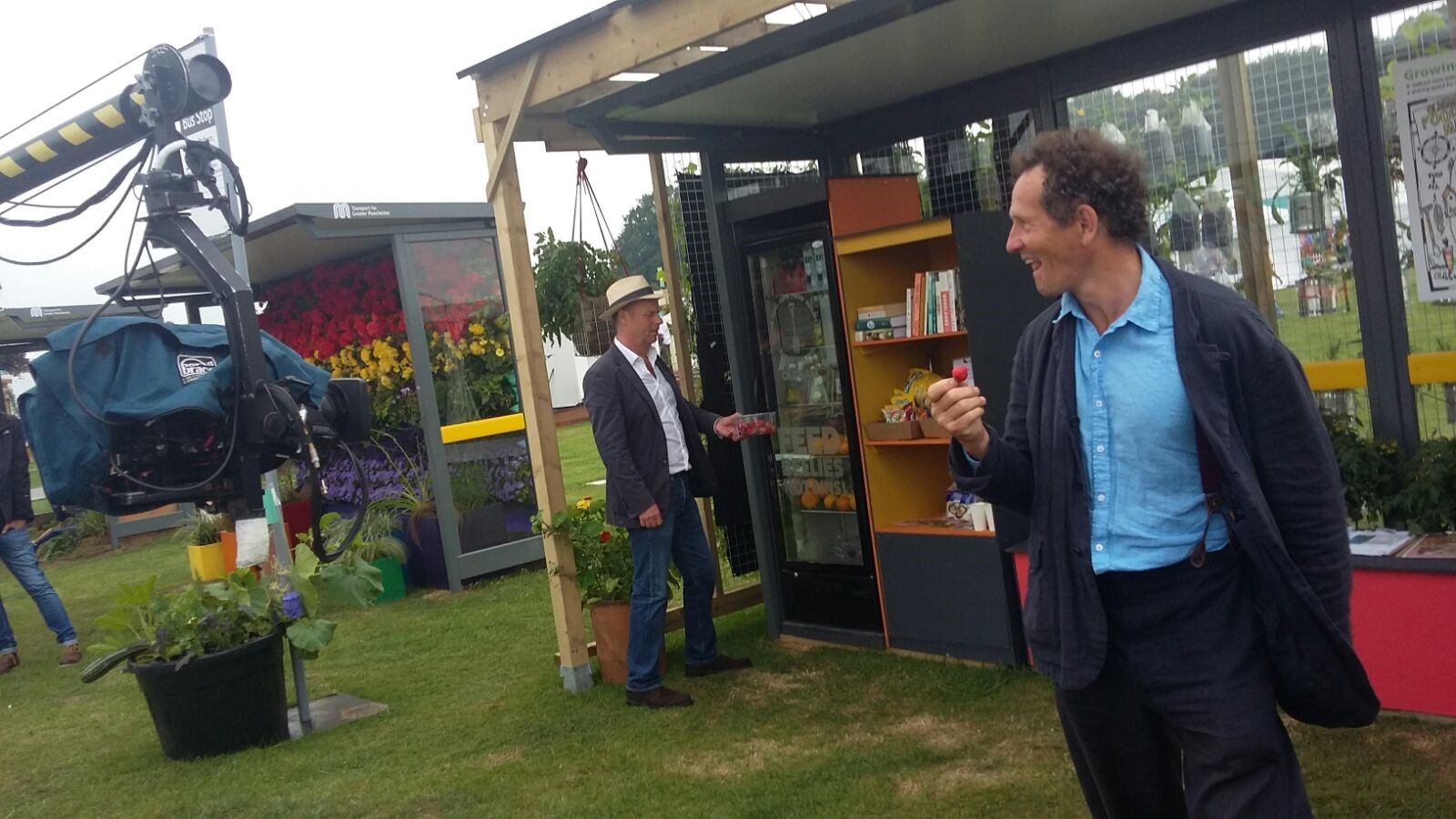 The bus stop was unfortunate not to win the people’s prize at the show, but it gained considerable attention throughout the week; Monty Don even helped himself to strawberries while filming the bus stop for the BBC’s coverage of the show!

Now the show is finished, the bus stop will not be taken apart but will be installed in Hollinwood to benefit the local community and educate local children about the importance of healthy eating.

There are now 60 members of OCP, thank you to everyone that has invested so far to make OCP a truly community-owned organisation.

We do, however, still need to raise almost £135,000 to repay a loan from Oldham Council and make sure that as many of the benefits of our solar panels are seen by the community as possible.
Please share the opportunity with family and friends to raise awareness of this opportunity!

Our share offer document can be downloaded here:
http://oldhamcommunitypower.org.uk/files/2017/04/OCP-share-offer-document-web-version.pdf

This has saved 56,856 kg of carbon dioxide, almost 57 tonnes, from being released into the atmosphere, the equivalent of taking over 29 cars off the road for a year*!

Energy generation split by our sites can be found on our website here:

As we approach the first anniversary of installations, some sites are behind the anticipated generation level due to initial difficulties following installation. We can, however, account for the shortfalls, and Blackshaw (where we have had no outages to date) looks likely to surpass its year 1 prediction. In subsequent years, without the difficulties we had in the initial phase, we are confident that we will see generation predictions exceeded across sites and will be able to make up year 1 generation shortfalls.

We need your help!

Oldham Community Power is a community benefit society run by volunteers from the community who give their time to make community-owned renewable energy a reality in Oldham.
As we expand our activities, we are looking for people who are interested in giving some time to support us, and are particularly looking for people skilled in:

If this sounds like you, why not write us a brief email saying who you are and what skills you can offer and send it to info@oldhamcommunitypower.org.uk?

Keep up to date with what we're doing

We are part of a growing community energy movement across Greater Manchester.
For more information about community energy and what's happening in GM, please visit
GM Community Energy Pledge