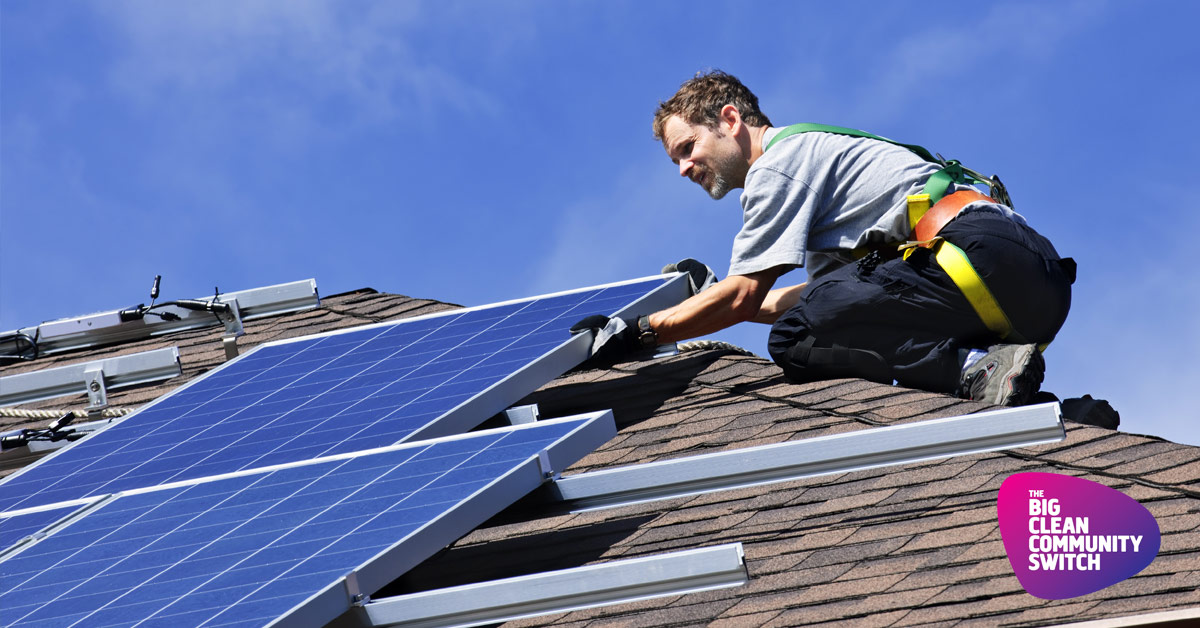 As part of our commitment to reduce Oldham’s carbon footprint and to support affordable energy access for all residents, we have teamed up with the Big Clean Switch campaign to encourage everyone to change to renewable electricity and help make Oldham one of the cleanest boroughs in the country.

Changing energy supplier through the new project will save residents hundreds of pounds a year on their energy bills compared to a standard variable tariff, while at the same time raising money for local renewable energy schemes.

A typical home can save more than £300 a year switching to the cheapest green tariffs[i], while the project will also channel 25% of the commission paid by green suppliers directly to OCP[ii]

OCP director Bill Edwards said the money will be used to support projects such as training and employment support for young people in the environmental sector, and steps to tackle fuel poverty.

The project has established a dedicated website – www.bigcleanswitch.org/oldham – where residents can compare the price of different renewable tariffs. The organisers claim it takes less than 10 minutes to get a quote and switch.

OCP already operates a number of local green energy projects, which retain the profits from generating renewable energy within the community. Now they want to help more people switch to renewable electricity providers in their own homes.[iii]

Bill Edwards said, “Switching to renewable electricity is critical if we’re to prevent the worst impacts of climate change, but most people don’t realise it could also save them money.”

James, an OCP member, said “Switching was very straight-forward, and best of all I’m actually saving money compared to my old provider! For some time I’ve been increasingly aware of the need to reduce my environmental impact, and the Big Clean Switch gave me the chance to do this.”

For an average home in Greater Manchester, the cheapest green tariffs available through the campaign are now within £15 to £25 of the very cheapest tariffs on the market, and hundreds of pounds cheaper than the average standard tariff with one of the country’s Big Six suppliers.[iv] Recent Ofgem figures show 60% of UK homes are on a default variable tariff.[v]

The national scheme is a partnership between the Big Clean Switch campaign[vi] and Project Dirt[vii], an umbrella organisation for community projects. Big Clean Switch is already working with the Greater Manchester Combined Authority, but organisers say the latest scheme is designed to work at a local level.

Big Clean Switch director Jon Fletcher said, “Community projects like OCP have a track record in talking to local residents about environmental issues. Who better to help people save money by switching to renewable electricity?”

If successful, the organisers hope the model can be replicated in towns and cities across the country.

[i] Typical saving calculated on 6 February 2018 by comparing an average usage dual fuel household on a Big Six Standard Variable Tariff (£1,135) with the cheapest tariff supplying 100% renewable electricity available through the Big Clean Switch website (£834). All prices are for a single rate meter paying by monthly direct debit, with prices averaged across all regions of England, Scotland and Wales. Average usage as defined by Ofgem is 12,000 kWh pa of gas and 3,100 kWh pa of electricity.

[ii] Every time someone switches energy supplier through this campaign, the supplier pays Big Clean Switch a commission. This doesn’t affect the tariffs offered, which are the same price or cheaper as you’d find on the suppliers’ own websites. Big Clean Switch uses some of the money to help fund its national campaign, and shares some with its delivery partners.

[iv] The cheapest open market tariff for a Greater Manchester postcode on 13 February 2018 was £811 a year for a medium consumption dual fuel household on a single rate meter paying by monthly direct debit. This compares with £828 a year for the cheapest comparable tariff available through the Big Clean Switch.

[vi] Big Clean Switch is part of Brakkn Ltd, a ‘profit with purpose’ company with a commitment to channel part of its profits to good causes both through the commission it shares with partners and through a corporate commitment to give at least 5% of its remaining profit to climate related causes.

[vii] Project Dirt is the UK’s most active network connecting and resourcing community projects. It receives 8% of the commission paid by suppliers when someone switches, after the costs of processing the switch have been deducted.

Keep up to date with what we're doing

We are part of a growing community energy movement across Greater Manchester.
For more information about community energy and what's happening in GM, please visit
GM Community Energy Pledge